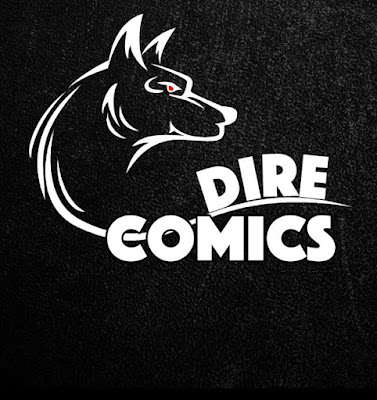 We are proud to announce that the first comic book store in Howell Michigan, Dire Comics, is the newest in a growing list of retail stores that carry Source Point Press comics. 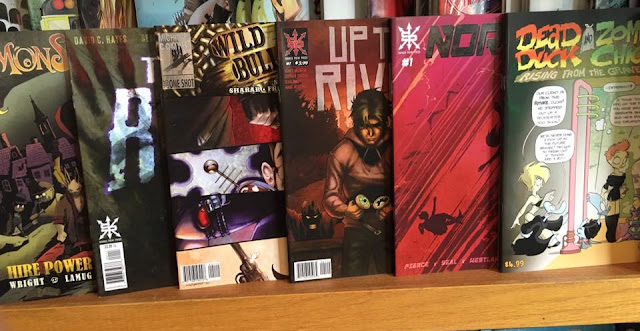 Dire Comics is an amazing place to stop by and pick up comics and graphic novels. They are a firm believer in offering their customers amazing titles from smaller publishers as well as hard to find collectibles. 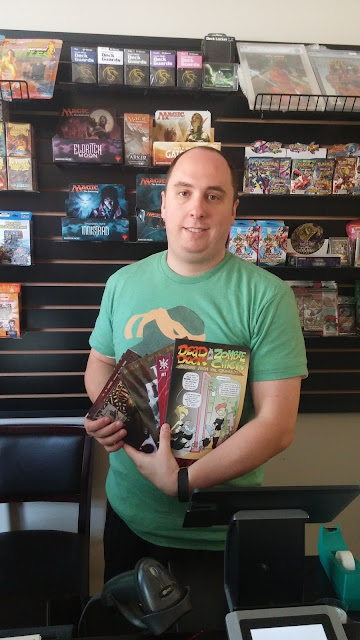 Not only is the owner, Kyle, a great guy that loves comics but he is dedicated to bringing the joy of comics to the Howell community. A great example of his dedication to the art form is that Kyle is organizing a comic convention in Howell that Dire Comics will be sponsoring. 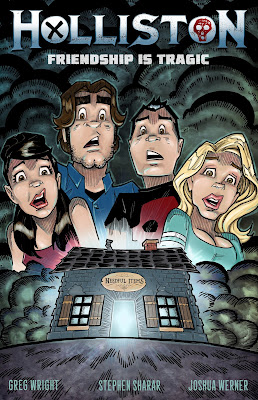 Source Point Press has announced the release date of the graphic novel “Holliston:Friendship is Tragic” will be October 26th and has opened up pre-orders for both readers and retailers.
The massive fanbase of the comedy/horror sitcom TV series Holliston, created by Adam Green (Hatchet, Frozen, Digging Up the Marrow), were thrilled when Entertainment Weekly announced that the fan-favorite TV show would be returning! But what can the fans do while they’re waiting for more Holliston episodes? They can read this brand new Halloween adventure featuring Adam Green’s beloved characters in their first graphic novel, Holliston: Friendship is Tragic!
Down on their luck wannabe filmmakers Adam and Joe want desperately to celebrate Halloween to the fullest, but their wallets say otherwise. When Adam finds a pre-paid credit card loaded with money, he decides to buy gifts for his friends Joe, Laura, and Corri from a mysterious shop full of rare items. Little does he know the card carried a terrible curse; one that will not only tear apart their friendships, but tear apart all of Holliston! Loaded with laughs, guest appearances, and horror movie references that fans of the show or just fans of great comics will all enjoy! Written by Greg Wright (Monstrous, Wild Bullets), edited by Travis McIntire (Up the River, Bayani and the Nine Daughters of the Moon), with pencils and Inks by Stephen Sharar (Up the River, Wild Bullets), and colors and letters by Joshua Werner (Zombie Rush Riot, Jack of Spades).
At this time, retailers are able to pre-order this exclusively through Source Point Press directly. “We’ve had great success working directly with stores,” says Source Point Press Art Director Joshua Werner, “which allows us to really get to know where our products are and allows us to better tailor our efforts to meet retailers’ needs.” 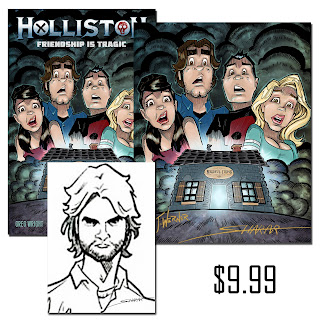 As of July 18th, Source Point Press has also opened up pre-orders on their website to customers as well two different options to choose from. “We’re all very passionate about this project, and we want to offer Holliston fans an option to get some bonus items if they choose,” says Source Point Press Editor-In-Chief Travis McIntire. Fans can pre- order the graphic novel by itself for only $4.99, a dollar less than the suggested retail price. Or for $9.99 their order will come with a sketch of a Holliston character drawn by comic book artist Stephen Sharar, as well as a mini-poster signed by the graphic novel’s creative team. “Also,” says McIntire, “we’ll be drawing four random names from the list of people who preorder, and they will be winning an original comic art page from the graphic novel.”
“The cast of the show have all been incredibly supportive and we’ve had such a great reaction already from the fans,” says Joshua Werner. “We’re just as excited for you to read this, I assure you.” To pre-order Holliston: Friendship is Tragic go to www.SourcePointPress.com and click on the ‘Store’ tab.

Source Point Press is a Detroit-based publisher of horror, supernatural, occult and pulp comics, novels, and art books. Founded in 2012 by Joshua Werner and Trico J. Lutkins, Source Point Press slowly paid their dues on the convention circuit, churning out titles. That hard work has begun to pay off as they find themselves as one of the fastest growing small press publishers in the industry!


More information can be found at www.SourcePointPress.com,
twitter.com/SourcePtPress and facebook.com/SourcePointPress.
Email josh@sourcepointpress.com for inquiries or interview opportunities with the creators.
Posted by Source Point Press at 6:52 AM

The month of July is usually not known for comic conventions or block buster Marvel or DC films but Source Point Press is about to change all that with events every weekend this month! 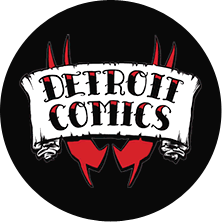 July 9th
Noon-5pm
The first stop to kick off our month of signings is Detroit Comics in Ferndale, MI. 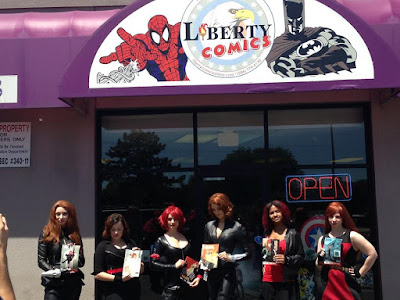 July 16th
Noon-5pm
Our next stop is Liberty Comics in Roseville, MI. The Ninja Starship Podcast with Jimmy McKnight will be there recording a live show. 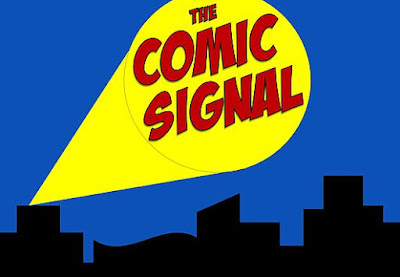 July 23rd
Noon-5pm
Our last signing of the month will be in Grand Rapids, MI at The Comic Signal.
Posted by Source Point Press at 2:21 PM 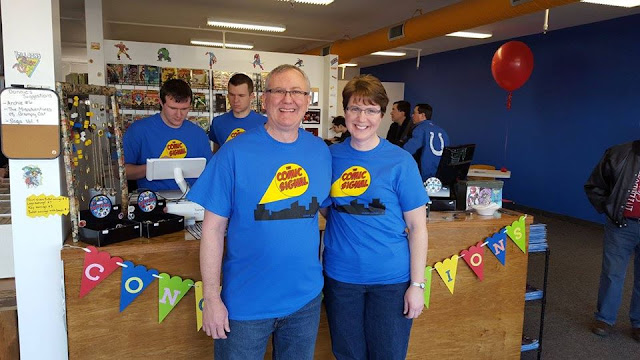 Recently, we had the pleasure of meeting a new retail partner, The Comic Signal. Everyone at SPP are lifelong comic fans and collectors, we attend almost 40 conventions a year, and we are in stores from the Midwest to the East Coast; so we thought we had seen everything the world of comics had to offer. That is, until we stopped in at The Comic Signal. They have rare titles we've never seen before, classic favorites and tons of hot new titles. So naturally, we couldn't be more proud to have our books carried there.
Founded by Don Myers, The Comic Signal is a home for comic book lovers and enthusiasts. They offer other comic related items as well as a venue for popular board games and collectible card games such as Magic the Gathering. 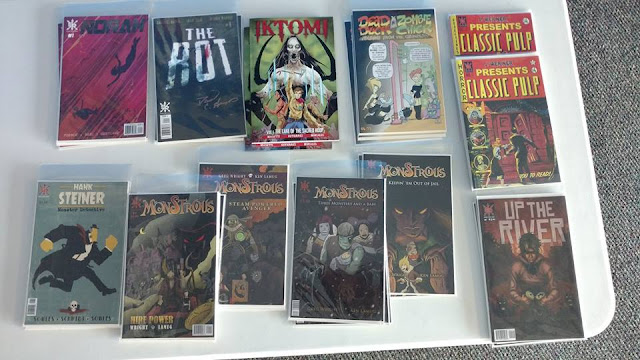 The Comic Signal is the premiere stop for your favorite Source Point Press titles such as Norah, The Rot, Savants, Hank Steiner, Jack of Spades, Rottentail, Scorn, Classic Pulp, Up the River, Magma-Man, Monstrous, Dead Duck and our latest graphic novel, Iktomi.

So stop by there today and check out this amazing store!

Fans of monsters, horror movies, and psychobilly music are in for a treat with this announcement!

Toronto-based band The Creepshow will appear in their first graphic novel next year, published by Source Point Press!
While on a European tour, the band members find themselves lost driving through a strange rural area. After an accident causes them to interrupt a sacred druid ceremony, the band find themselves fulfilling a prophecy that they would battle to save the world from the armies of the undead... Whether they want to or not! Loaded with laughs, gore, and monsters of all kinds, "The Creepshow in Necrogeddon" will please fans of the band, fans of monster movies, fans of comedy, or just fans of great entertainment!
Written by Trico J. Lutkins, edited by Travis McIntire, with artwork by Joshua Werner! Keep checking back for more news on this exciting officially licensed The Creepshow graphic novel! 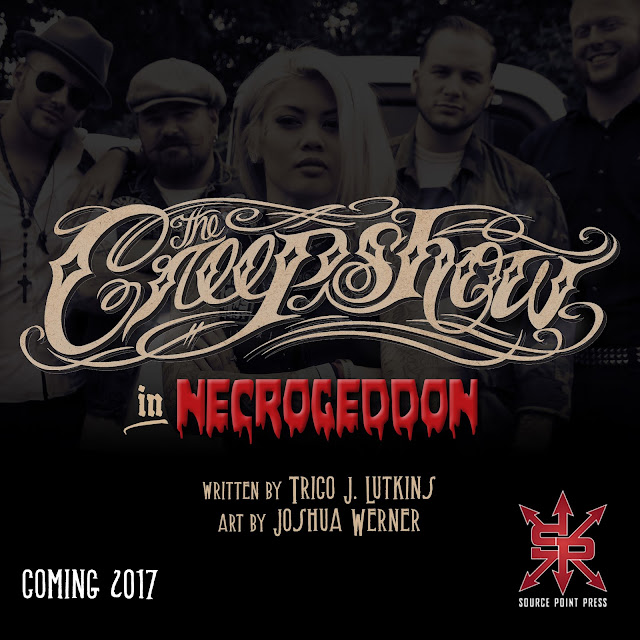 Posted by Source Point Press at 11:02 AM

Source Point Press is preparing to knock the socks off of fans at C2E2 in Chicago this weekend! We've rented a bus so we can arrive in full force Thursday night to set up our massive publisher's booth right next to Michigan indie comic legend, Caliber Comics. From Friday the 18th until Sunday the 20th, we will be releasing not one, not two, not even three but FOUR BRAND NEW TITLES!!!

DEAD DUCK & ZOMBIE CHICK: RISING FROM THE GRAVE #1 by Jay Fosgitt, is a dark comedic featuring the return of Dead Duck and Zombie Chick! Laugh along with the deadpan humor as Dead Duck does his best to keep up on his day job....delivering the souls of the dead for processing!

NORAH by Kasey Pierce is a scifi miniseries about a "coma fisher."

THE ROT by David C. Hayes brings the fear and terror a horror movie to the superhero genre.

SAVANTS by legendary indie comic writer, Gary Reed, is unlike anything you've ever seen before!

Aside from these new titles we will also have the following creators available to sign their comics and graphic novels:

Author, Travis McIntire, will be there all weekend to sign copies of UP THE RIVER from Source Point Press, and BAYANI #1-3 from Caliber Comics!

MONSTROUS creator, Greg Wright, will be available all weekend to sign the runaway hit miniseries.

Artist extraordinaire, Joshua Werner, will be available for commissions and to sign the recently released, JACK OF SPADES graphic novel, and his one shot comic, THE PAINTING.

Artist, Stephen Sharar, will be taking commissions and signing UP THE RIVER.

Great Lakes Comic Con is one of our favorite conventions and we had a blast. The SPP crew sold a ton of books, made some great new fans, and connected with some old friends! 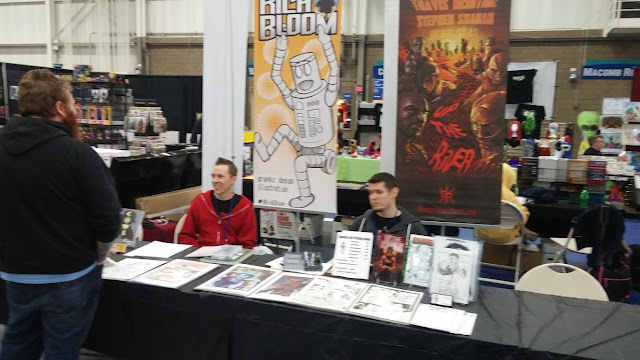 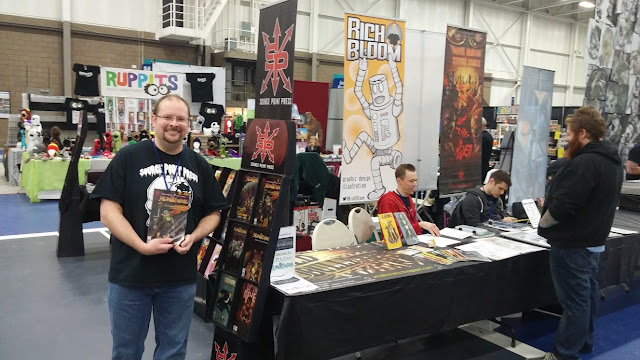 Greg Wright is selling through hundreds of copies of Monstrous like a boss! 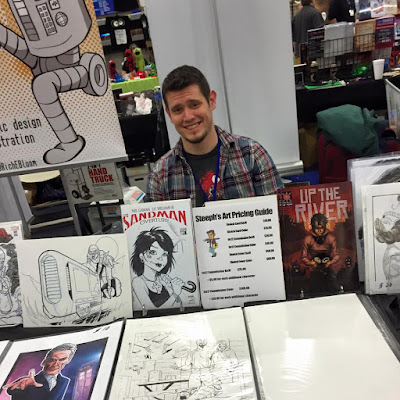 We already had one pic of Steve Sharar but we decided to throw in another one for the ladies! Lol 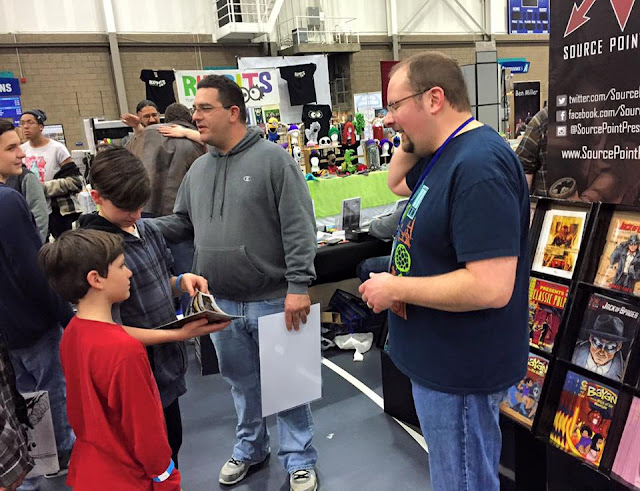 Comic readers of all ages become instant fans of Monstrous and it's author, Greg Wright! 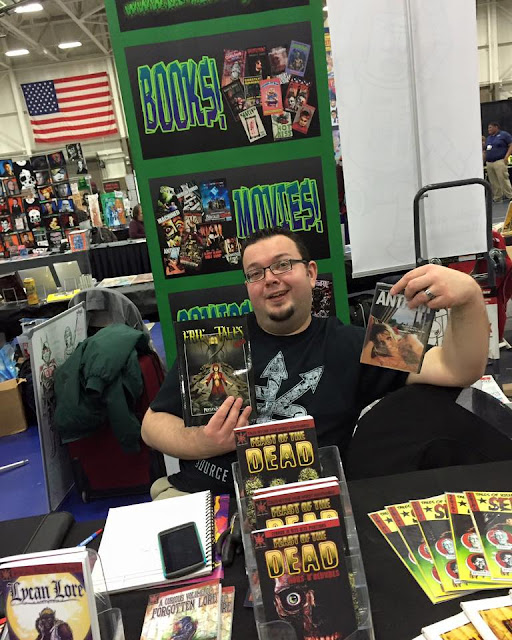 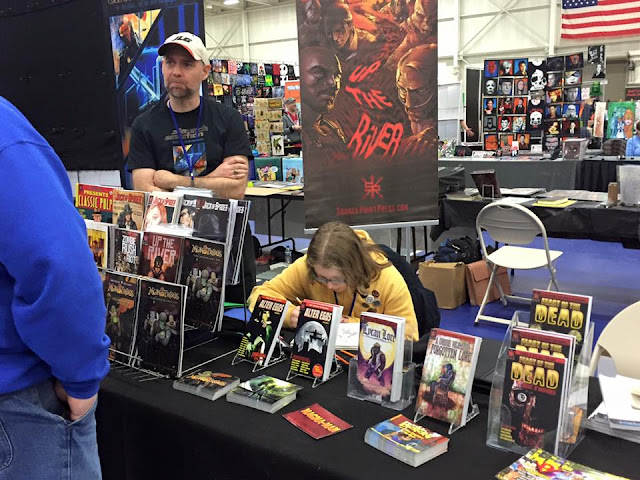 You're never to young (or old) to love comics and to become an artist. Junior Source Pointer, Audrey, makes some quick sketches for fans. 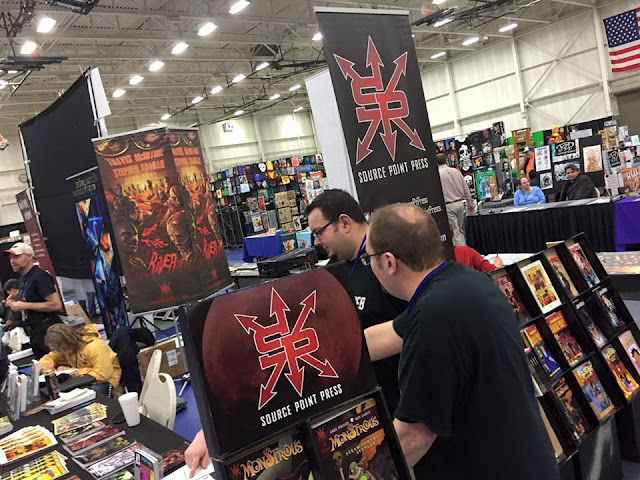 No matter where you look at a comic convention, you're likely to see the SPP logo! 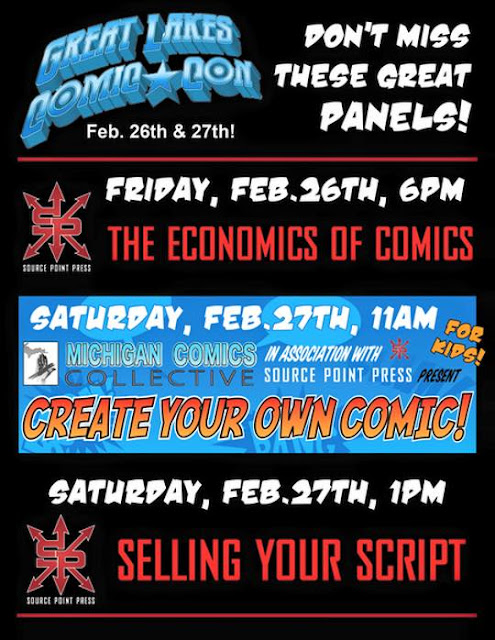 We love the indie comic book community and we especially love to give back to it so we try to do as many panels as we can at conventions to help new indie creators. 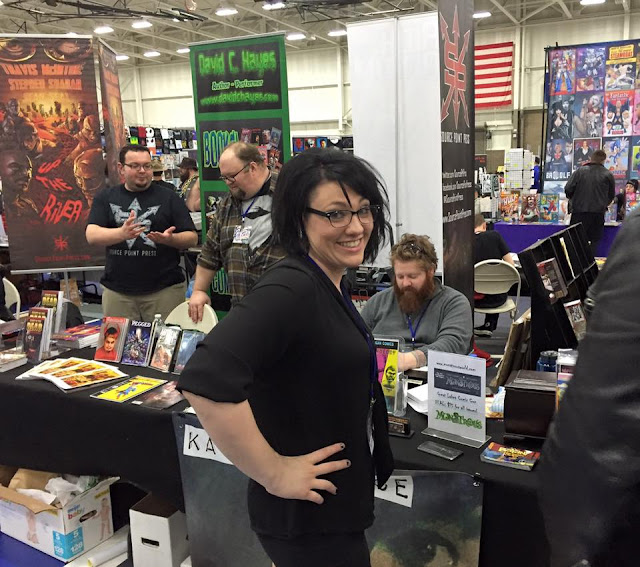 SPP is very excited to have author, Kasey Pierce, among our ranks and we were super-pleased to have her at the SPP booths to promote her new comic series, Norah. Available next month! 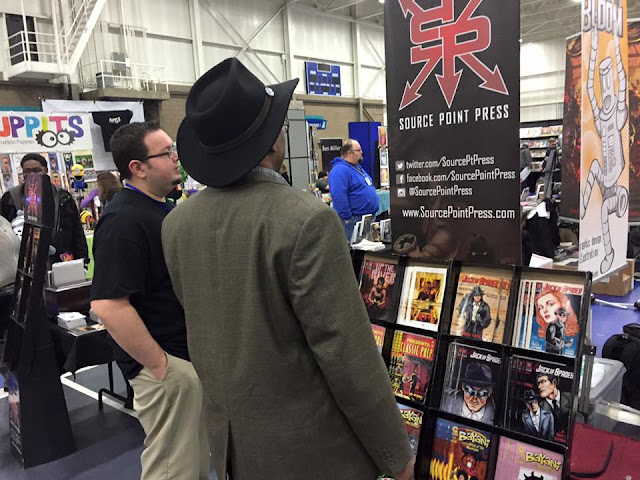 Sometimes people line up just to look at our displays. Lol 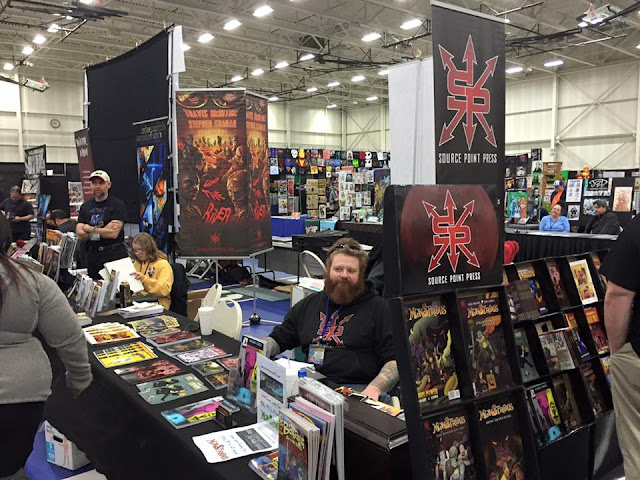 Its a little known fact that SPP president, Travis McIntire, can actually grow his beard through meditation. Here we see him after a meditation session. "I just shaved this morning." McIntire commented. Lol
Posted by Source Point Press at 4:38 PM 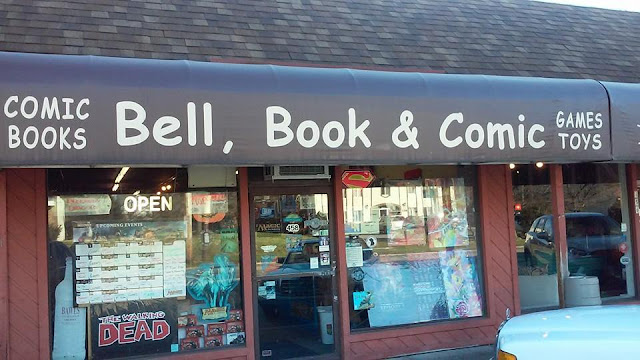 Source Point Press is proud to welcome our latest retail partner, Bell Book & Comic, to the SPP family. We visited this store last weekend at ICE (Indie Comic Expo) and we were blown away at how much awesome comic books, toys, games and all around sweet merchandise we found under one roof. Bell Book & Comic is an amazing store and we highly recommend it to anyone in, around or even passing through the Dayton, OH area.

SPP will be at the Shelby Con this weekend!!! 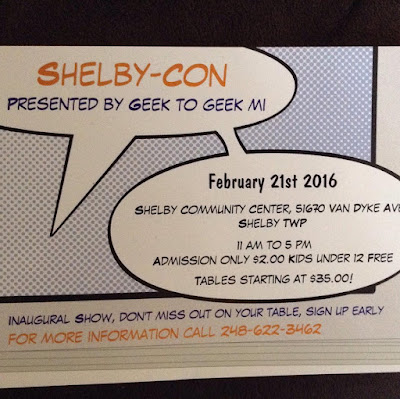 Hi folks! It had been awhile since we did a Michigan convention so we're very excited to be returning to our old stomping grounds (Michigan) so we're very proud to be attending the Shelby Con in Shelby Township, Michigan on the 21st of February. Also, SPP will be hosting a panel on creating your own comic. We'll see you there! :)
Posted by Source Point Press at 5:06 PM